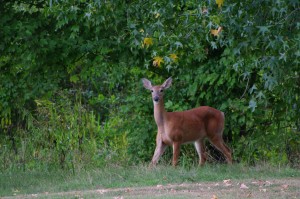 Recently, we’ve had some deer problems at one of our properties and when an agent called in to report an injured deer on the property, I figured I ought to see what I could do. The agent mentioned the property in Hollywood Park, so I headed on over to Google to find the city’s website to see who I should call or what I should do. Of course, had I thought for a second, I would have realized that the property was in neighboring Hill Country Village, but in my rush to find a solution, I would up contacting Hollywood Park. In digging through the Hollywood Park website, I found a wildlife incident form and filled it out.

A hour or so later, I received an email from Tonya, President of the Hollywood Park Deer Committee, who also emailed the Chief of Police to see if they could go check out the incident. I was very impressed with the speed of service and the general responsiveness. The following morning, Tonya also called me up to let me know that she appreciated me using the wildlife incident form and that in fact, the property was located in Hill Country Village (which I felt pretty stupid about), but the Chief of Police had called over to them to let them know about the injured deer.

So thank you to Hollywood Park, Chief Prichard, and Tonya for being so respsonsive and helpful. Based on that interaction, I can tell that Hollywood Park is an excellent neighborhood with a great city government that truly responds to the needs of their residents, something that isn’t always easy to find.

Open floorplan living is often billed as the perfect floor plan, bringing family together in a single room where cooking, conversation and the screen share the same space. It has been a popular feature of a … END_OF_DOCUMENT_TOKEN_TO_BE_REPLACED

No room carries more influence with a buyer than the kitchen because it’s where the everyone gathers and many memories are made. The kitchen can represent up to 20% of the entire value of a property, so it’s … END_OF_DOCUMENT_TOKEN_TO_BE_REPLACED

A fire in your home can happen at any time of the year, but with colder months upon us it’s easy to see how the danger increases with the setting of wood-burning heaters and the use of candles to create a cozy … END_OF_DOCUMENT_TOKEN_TO_BE_REPLACED

As a homeowner, you’ll inevitably have to call in a Sydney plumber to deal with plumbing problems at some stage. It’s one of the ‘pleasures’ of owning property! Choosing the right contractor can feel a little … END_OF_DOCUMENT_TOKEN_TO_BE_REPLACED

Being a first time homebuyer can feel quite intimidating – you’ve got to deal with agents, sellers, rival buyers, banks, and title companies. And it’s not always clear what role each of them plays in the … END_OF_DOCUMENT_TOKEN_TO_BE_REPLACED