You are here: Home / Archives for camp bullis 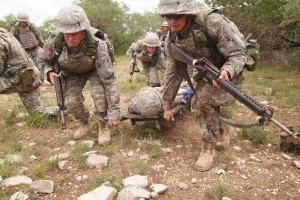 The military presence plays a huge part in San Antonio’s continued economic and population growth, but with it comes the difficulties of encroaching residential space near the bases, including Camp Bullis. Active since 1917, Camp Bullis is a military training facility and despite its massive size in the north-central/western area of San Antonio, few don’t notice it until they hear the sound of gunfire or notice the increased presence of military vehicles or aircraft when training exercises are taking place (our office is located near Camp Bullis and we often hear the sounds of machine guns off in the distance during the day). If you’re not expected it, it can come as quite a surprise.

Buying or Selling a Home Near Camp Bullis?

In real estate, we always talk about disclosure and with an active military base in your backyard, things are no different. Although not required as a disclosure, the city of San Antonio provides a voluntary disclosure for use by those selling homes in the area of Camp Bullis (aka the Awareness Zone). The Camp Bullis Awareness Zone Voluntary Real Estate Disclosure Statement (PDF file) is a brief document that explains some of what a potential buyer can expect from living close to an active military base like Camp Bullis. While not required by law, owners wanting to sell their homes in the area might want to include the Camp Bullis Awareness Zone Voluntary Real Estate Disclosure Statement along with their Seller’s Disclosure. Will it discourage some potential buyers? Possibly. In cases like this, it is always best to disclose your knowledge fully though, as a buyer could buy your home and feel that they were mislead about living near an active military base and what that means to them as homeowners. When people feel they’ve been mislead, it usually ends up in the legal system and that’s something that no one wants when buying or selling a home.

It doesn’t matter if you’re someone who closely follows the economy or not, chances are you’ve heard whispers of an upcoming recession. Economic conditions are determined by a broad range of factors, so rather … END_OF_DOCUMENT_TOKEN_TO_BE_REPLACED

If you’re thinking about buying or selling a home, you probably want to know what’s really happening with home prices, mortgage rates, housing supply, and more. That’s not an easy task considering how … END_OF_DOCUMENT_TOKEN_TO_BE_REPLACED

There are many people thinking about buying a home, but with everything affecting the economy, some are wondering if it’s a smart decision to buy now or if it makes more sense to wait it out. As Bob Broeksmit, … END_OF_DOCUMENT_TOKEN_TO_BE_REPLACED

If you’re a young adult, you may be thinking about your goals and priorities for the months and years ahead. And if homeownership ranks high on your goal sheet, you’re in good company. Many of your peers are … END_OF_DOCUMENT_TOKEN_TO_BE_REPLACED