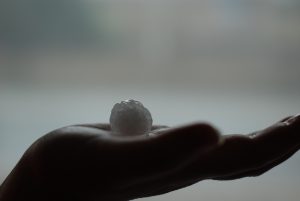 Did your home suffer hail damage during the storms earlier this year? Many people don’t even know that their homes were affected by the hail storms and since they’ve experienced no leaks or obvious things like broken windows, they think they have escaped the major brunt of the storms and all is well. Many homeowners don’t know anything happened at all…until they go to sell their homes and the buyer comes along for the home inspection. If your home was in the path of one of the storms that brought with it extensive hail damage, chances are the inspector will find evidence of it and notate it in their report. Once it’s on that report, you’re going to have to deal with it one way or another.

Inspectors know what neighborhoods experienced hail damage and which didn’t, so they are on the lookout for the telltale signs of damage on rooftops. It is important to construct roofs as suggested by BA Roofing so as to protect them from  hail and snow damage. On composition shingle roofs, the hail typically leaves a mark upon impact, which removes some of the granules from the shingle roofing and there is often a bit of a skid mark where they hit the roof and begin to slide down. Although these pockmarks can be small and seem insignificant in the grand scheme of things, they are an indication of long term wear and tear and while they may not be causing a leak now, they can cause issues in the future. Roofer Charlotte NC provides a best roofing services in North Carolina and with strong metal roofing hailstorms will not bother you anymore.Inspectors are there to report their findings to the buyer and because of the heightened awareness of hail in the area, they are looking at roofs more closely. Remember, the inspector has to protect their liability too – so when things like this become common place in an area, they are more likely to report these kinds of issues. They have to cover their liability and make everyone aware of the potential disclosure of items that could cause trouble for the owner – now or after the sale.

Once an inspector notates evidence of hail damage in their report, you’re stuck with it. As a seller, you now have a few basic choices:

Whichever route you choose, you’re going to want to keep the buyers updated and informed and you will need to get them to come to an agreement with you on how to proceed. As always, you’ll want to get everything in writing and your agent will draw up and amendment to the contract to reflect the decisions made on how everything will be handled.

Do You Have Hail Damage?

Most homeowners don’t go up on their roofs very often to inspect them, so you may not even know you have hail damage. If the storms passed through your neighborhood, chances are you do, even if it is only slight damage. Telltale signs you may need to think about your roof? If you’re seeing roofers all throughout your neighborhood, signs in the yards for roofing companies, pallets of shingles stacked in driveways…you’re going to want to get your roof checked. Buyers and their agents will be looking for those signs as well as having the home inspected and chances are, some evidence of hail damage will be found.

If you’re thinking about selling and live in an area that did experience hail storms, you can call your insurance company beforehand and have them come out to inspect the roof. It will save a lot of time and hassle while the home is under contract and you can have the work started sooner rather than later. You’ll probably have to come out of pocket for some of it (at least your deductible), but doing it now can save you the hassle and headache later during the sale. If you decide to have the whole roof replaced by commercial roofing contractors, it can add value to your home as well, so you may wind up with better, stronger offers for more money, especially since many buyers are aware of the length of time it can take to get these problems resolved while the home is under contract and they may not be prepared to take on the challenge of those types of delays. A little preparation goes a long way.

It doesn’t matter if you’re someone who closely follows the economy or not, chances are you’ve heard whispers of an upcoming recession. Economic conditions are determined by a broad range of factors, so rather … END_OF_DOCUMENT_TOKEN_TO_BE_REPLACED

If you’re thinking about buying or selling a home, you probably want to know what’s really happening with home prices, mortgage rates, housing supply, and more. That’s not an easy task considering how … END_OF_DOCUMENT_TOKEN_TO_BE_REPLACED

There are many people thinking about buying a home, but with everything affecting the economy, some are wondering if it’s a smart decision to buy now or if it makes more sense to wait it out. As Bob Broeksmit, … END_OF_DOCUMENT_TOKEN_TO_BE_REPLACED

If you’re a young adult, you may be thinking about your goals and priorities for the months and years ahead. And if homeownership ranks high on your goal sheet, you’re in good company. Many of your peers are … END_OF_DOCUMENT_TOKEN_TO_BE_REPLACED