You are here: Home / Sell Your Home / Going it Alone: For Sale By Owner 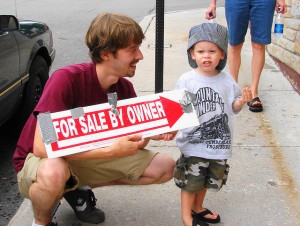 There are some people who will always want to go it alone and sell their home as a for sale by owner. Real estate agents will often argue the pros and cons with anyone thinking about doing things themselves and it is our belief that the cons outweigh the pros (but, we’re real estate agents, so we have to say that). Although the potential for doing it as a for sale by owner (or FSBO as they are called in the industry) has greatly increased since the boom of the internet for real estate by making it easier to be spotted, there is still a key ingredient missing from most for sale by owners properties. Bet you’re thinking it’s “the expertise of an agent”…right? Well, that’s not where I’m going with this one.

The key ingredient? The MLS or Mutiple Listing Service. While it can be argued that the wealth of property sites on the internet make up for this, the MLS is still a treasure trove of information for home buyers.

Ninety-one percent of home buyers who used the Internet to search for a home purchased through a real estate agent, as did 71 percent of non-Internet users, who were more likely to purchase directly from a builder or from an owner they already knew in a private transaction.

As you can see from the quote above (from an analysis of the NAR Survey of Home Buyers and Sellers), 91% of home buyers that used the internet still used a real estate agent. So where did they find the property they eventually bought?

When buyers were asked where they first learned about the home they purchased, 42 percent said the Internet; 34 percent from a real estate agent; 10 percent a yard sign or open house; 6 percent from a friend, neighbor or relative; 5 percent home builders; 2 percent directly from the seller; 1 percent a print or newspaper ad; and less than 1 percent from other sources.

Although more people said they found their home on the internet (42%) than they did from a real estate agent (34%), this number is not something to throw away. Would you want to throw away 1/3 of your potential buyers by not using a real estate agent? Something else to consider – what percentage of the 42% of people that first found their home on the internet were using an agent’s IDX search or found a home that was on a listing syndication website (which are often pushed through thanks to the MLS)? Even if the answer is zero, the 34% is still a large chunk of people to not advertise your property to.

Of course, there are other pitfalls and problems to selling a home on your own, but for now, I’ll leave that argument for another day.

It doesn’t matter if you’re someone who closely follows the economy or not, chances are you’ve heard whispers of an upcoming recession. Economic conditions are determined by a broad range of factors, so rather … END_OF_DOCUMENT_TOKEN_TO_BE_REPLACED

If you’re thinking about buying or selling a home, you probably want to know what’s really happening with home prices, mortgage rates, housing supply, and more. That’s not an easy task considering how … END_OF_DOCUMENT_TOKEN_TO_BE_REPLACED

There are many people thinking about buying a home, but with everything affecting the economy, some are wondering if it’s a smart decision to buy now or if it makes more sense to wait it out. As Bob Broeksmit, … END_OF_DOCUMENT_TOKEN_TO_BE_REPLACED

If you’re a young adult, you may be thinking about your goals and priorities for the months and years ahead. And if homeownership ranks high on your goal sheet, you’re in good company. Many of your peers are … END_OF_DOCUMENT_TOKEN_TO_BE_REPLACED