You are here: Home / Real Estate / Remnants of a Different World of Real Estate 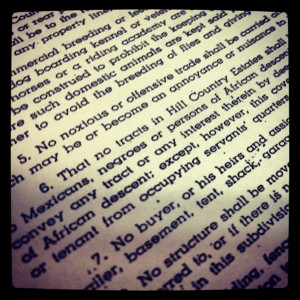 While doing some property research yesterday at the office, we came across an old deed from 1953. In the deed was a section regarding the racial and national status of the residents allowed to live in Hill Country Estates. As you can see from the photo to the left, some of it was a bit shocking to see.

Despite what you may think, there are actually quite a lot of these notations in deeds and home owner association documents. Of course, real estate has changed (as has the country) a lot over the years and language like this and refusal to sell or rent to someone based on their race or nationality is illegal thanks to the Fair Housing Act which was first adopted in 1968.

I’m glad that times have changed as I can’t imagine living in a world with such segregation and blatant racism. The Fair Housing Act made it illegal to discriminate against people with regards to race, color, religion, national origin, sex, disability, or familial status. The NAR Code of Ethics also adds sexual orientation to the list.

Although some of these discriminatory paragraphs still exist in current documents, they are superseded by the Fair Housing Act. Much like “blue laws” they are left in the language of many documents, despite them being ignored because of newer laws such as those regarding fair housing. Overtime, as documents are rewritten and amended, the offending language is often removed, but because of the nature of the slow processes of the law, they often linger much longer than they should.

Open floorplan living is often billed as the perfect floor plan, bringing family together in a single room where cooking, conversation and the screen share the same space. It has been a popular feature of a … END_OF_DOCUMENT_TOKEN_TO_BE_REPLACED

No room carries more influence with a buyer than the kitchen because it’s where the everyone gathers and many memories are made. The kitchen can represent up to 20% of the entire value of a property, so it’s … END_OF_DOCUMENT_TOKEN_TO_BE_REPLACED

A fire in your home can happen at any time of the year, but with colder months upon us it’s easy to see how the danger increases with the setting of wood-burning heaters and the use of candles to create a cozy … END_OF_DOCUMENT_TOKEN_TO_BE_REPLACED

As a homeowner, you’ll inevitably have to call in a Sydney plumber to deal with plumbing problems at some stage. It’s one of the ‘pleasures’ of owning property! Choosing the right contractor can feel a little … END_OF_DOCUMENT_TOKEN_TO_BE_REPLACED

Being a first time homebuyer can feel quite intimidating – you’ve got to deal with agents, sellers, rival buyers, banks, and title companies. And it’s not always clear what role each of them plays in the … END_OF_DOCUMENT_TOKEN_TO_BE_REPLACED