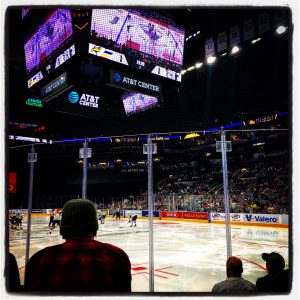 The San Antonio Rampage is the local team of the AHL, a minor league system of the NHL. Affiliated with the St. Louis Blues, the Rampage is always a good time and a bargain when it comes to professional sporting events.

Fast moving, hard hitting, and never short on excitement, hockey may not be the biggest sport here in San Antonio, but the AT&T Center comes alive when the Rampage hit the ice. No wonder solid fans still bet on their teams on platforms like slot27.

If you haven’t been to a game, take our advice and go. Hockey is one of those sports that’s best experienced live. Hearing the crushing blow of a player getting pounded into the corners or the crack of the puck against the glass after a slap shot, the level of excitement can’t be replicated on television and hearing about a classic hockey fight from your friends the day after is never the same as seeing it unfold in front of you. If you’re more of a football fan, you can check out the Football Ticket Pad for affordable tickets.

It doesn’t matter if you’re someone who closely follows the economy or not, chances are you’ve heard whispers of an upcoming recession. Economic conditions are determined by a broad range of factors, so rather … END_OF_DOCUMENT_TOKEN_TO_BE_REPLACED

If you’re thinking about buying or selling a home, you probably want to know what’s really happening with home prices, mortgage rates, housing supply, and more. That’s not an easy task considering how … END_OF_DOCUMENT_TOKEN_TO_BE_REPLACED

There are many people thinking about buying a home, but with everything affecting the economy, some are wondering if it’s a smart decision to buy now or if it makes more sense to wait it out. As Bob Broeksmit, … END_OF_DOCUMENT_TOKEN_TO_BE_REPLACED

If you’re a young adult, you may be thinking about your goals and priorities for the months and years ahead. And if homeownership ranks high on your goal sheet, you’re in good company. Many of your peers are … END_OF_DOCUMENT_TOKEN_TO_BE_REPLACED