You are here: Home / Miscellaneous / Moving? Call Two Men and a Truck 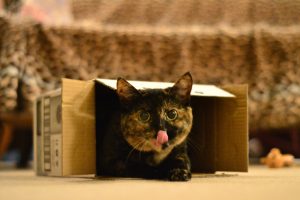 Recently, I moved to a new place and hired Two Men and a Truck. I hate moving with a passion and can think of about ten million things I’d rather do. I called around to a bunch of companies, looking for someone that could haul my stuff from Point A to Point B without breaking it all. Let’s just say my last experience wasn’t so great, so I wasn’t looking forward to this one very much. After finally settling on Two Men and a Truck (based on some recommendations and their price quote), I awaited my Saturday move with my parts of the semi truck. Unfortunately, I came down with a nasty fever just days before my scheduled move and knowing there was no way I could finish packing or handle moving day with a fever and chills, I called the company to see what their cancellation policy was.

Laura Jordan, who had been handling the setup of my move, reacted quickly and got me rescheduled for the following week so that I didn’t have to pay any cancellation fees. The company gets a point for that alone. They easily could have charged me for it, but worked with me to get it all rescheduled without any hassle. After spending the weekend recovering from the plague, I awaited my new move date and packed up the last few items I had left. If you’re one decision away from moving as well, it makes a difference to hire local movers.

I moved on a Wednesday in the afternoon, so I was rushing around trying to get last minute work things done while keeping my eye on the clock to be sure I wasn’t late getting to my place for the movers. The guys were running a little late, but the Two Men and a Truck office staff called me to let me know and gave me a new estimated time of arrival. When the guys showed up, they wasted no time going through a checklist of what needed moved and any special instructions I had about some bigger items (large paintings and TVs/computer monitors). The flurry of activity that followed was unprecedented in all of the moves I’ve ever made (including several cross-country trips). The Edmonton movers didn’t stop, didn’t take a break, and didn’t pause for the next three and a half hours. From loading to unloading, they were fast, efficient, and careful with my stuff. They knew what they were doing and did it in a way that made me feel confident that nothing would be broken at the other end of the move – and that feeling was justified when I went through the various boxes and started to unpack.

Like I said, I hate moving. I hate everything about it. But if I ever move again (I hope I don’t anytime soon), I will most certainly be calling Two Men and a Truck to do so quickly, safely, and efficiently. If you’re looking for a moving company, give them a call at (210) 693-1455 or visit their website to start the process of getting a quote for your move.

If you’re thinking about buying or selling a home, you probably want to know what’s really happening with home prices, mortgage rates, housing supply, and more. That’s not an easy task considering how … END_OF_DOCUMENT_TOKEN_TO_BE_REPLACED

There are many people thinking about buying a home, but with everything affecting the economy, some are wondering if it’s a smart decision to buy now or if it makes more sense to wait it out. As Bob Broeksmit, … END_OF_DOCUMENT_TOKEN_TO_BE_REPLACED

If you’re a young adult, you may be thinking about your goals and priorities for the months and years ahead. And if homeownership ranks high on your goal sheet, you’re in good company. Many of your peers are … END_OF_DOCUMENT_TOKEN_TO_BE_REPLACED

There’s no denying mortgage rates are higher now than they were last year. And if you’re thinking about buying a home, this may be top of mind for you. That’s because those higher rates impact how much it costs … END_OF_DOCUMENT_TOKEN_TO_BE_REPLACED