You are here: Home / Buying a Home / Building A New Home In San Antonio? Consider this… 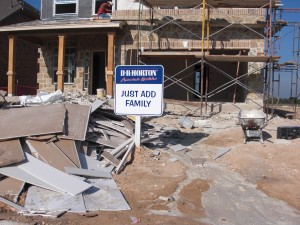 Use a REALTOR® or not?

Being a REALTOR® in San Antonio, we all hear certain common questions that seem to constantly be on buyers’ and sellers’ minds. The question (and debate) over whether to use the services of a real estate agent when buying a new construction home comes up quite a lot. Should you go straight to the builder and work with them or hire a real estate agent to work for you?

In many people’s minds, the benefits of not hiring an agent when building a new home is that there will be significant savings on not having any commissions included in the price of the home. In other people’s minds, the sales representatives at the new home communities are just like having an agent – they do the paperwork and make sure everything works out right. Let’s take a look at these two schools of thought.

No commission equals a better price.

If you don’t hire an agent to help in building a new home, you won’t have to pay the commissions in the price of the new home. Seems sensible enough. Although the seller (builder) pays the buyers agent’s commission, if you’re not using a buyers agent, logic would suggest you can just scrap that piece of the price of the home. Unfortunately, the logic doesn’t work that way. The builder has calculated a certain price for the new home and has included commissions in that price. If they were to discount all of their homes that were sold without a buyers agent to account for the lack of a commission, they would essentially be bringing the price of their neighborhood down. When a buyer came along with a REALTOR® representing them, it would be possible to argue that the price is several thousand dollars out of line with other recent sales. It doesn’t make sense for the builder to do this and in the long run would affect their profitability.

Builders are a profit driven machine and have carefully calculated their profit margins on each and every home they build. Even when they offer higher commissions and cash incentives to both agents and buyers, they still have a target number in mind at which they will be profitable. If they’re not going to discount the price of your new home because you’re not working with an agent, guess where that extra money goes? That’s right – the builder’s profit. Does it make sense for a buyer to go into a new home purchase unrepresented in order to increase the builder’s profit? I think I can guess your answer.

The sales representative will take care of me.

I’ve met a ton of builder sales representatives. I’ve never met one I thought was shady or slimy, although I’m sure there are some out there. No, this isn’t about the reps pulling a fast one on you, but about simple representation. If you’re looking to build a new home, who’s going to look after you during the process if you’re not represented by a REALTOR®? The sales rep gets their paycheck straight from the builder. Let’s look at an example for argument’s sake. Your dream home is coming along just fine and you’ve been thrilled with the process. As the builder begins to install the fireplace that you couldn’t wait to have, you realize they’ve installed it level with the floor – you swore on the original plans it was a raised hearth and you are correct in remembering it that way. The builder has just paid the contractor to install the fireplace and now you want it fixed. If they fix the fireplace, it’s going to cost them time and money. Do you think the builder will just shrug and start tearing down the mistake? Of course not, they’re going to try and preserve their profitability and try to come up with the solution that costs them the least. This actually happened to one of our clients. The builder’s proposed solution? The builder offered them a few upgraded light fixtures. Lucky for our clients, we were on top of the situation and held the builder to the original plans. We wound up with both the light fixtures and a corrected fireplace.

The sales representatives represent the builder. It’s similar to buying a home with the listing agent which is a form of dual agency called intermediary in Texas. During the process of building a new home there are a lot of things happening, from inspections to financing to selecting the finishing touches…wouldn’t it make sense to have someone on your side during the process?

Open floorplan living is often billed as the perfect floor plan, bringing family together in a single room where cooking, conversation and the screen share the same space. It has been a popular feature of a … END_OF_DOCUMENT_TOKEN_TO_BE_REPLACED

No room carries more influence with a buyer than the kitchen because it’s where the everyone gathers and many memories are made. The kitchen can represent up to 20% of the entire value of a property, so it’s … END_OF_DOCUMENT_TOKEN_TO_BE_REPLACED

A fire in your home can happen at any time of the year, but with colder months upon us it’s easy to see how the danger increases with the setting of wood-burning heaters and the use of candles to create a cozy … END_OF_DOCUMENT_TOKEN_TO_BE_REPLACED

As a homeowner, you’ll inevitably have to call in a Sydney plumber to deal with plumbing problems at some stage. It’s one of the ‘pleasures’ of owning property! Choosing the right contractor can feel a little … END_OF_DOCUMENT_TOKEN_TO_BE_REPLACED

Being a first time homebuyer can feel quite intimidating – you’ve got to deal with agents, sellers, rival buyers, banks, and title companies. And it’s not always clear what role each of them plays in the … END_OF_DOCUMENT_TOKEN_TO_BE_REPLACED